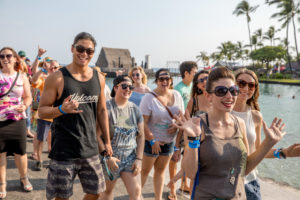 KAILUA-KONA-The 24th annual Kona Brewers Festival will be held Saturday, March 9, 2019, on the shores on the shores of Kamakahonu Bay at the Luau grounds of the Courtyard King Kamehameha Kona Beach Hotel. The non-profit Beer and Food Festival is organized by Hawaii Island’s Ke Kai Ala Foundation, raising funds for twenty Hawaii Island programs working for environmental and youth causes, as well as cultural preservation and celebration.

The sell-out festival features what’s new from founding sponsor, Kona Brewing Company, and ticket holders can also expect around 36 chefs and 36 brewers to present their very best island eats and small batch brews. The quality of beer from all over the United States coupled with fresh, local, Hawaii-style food is part of what makes this festival unique. Festival goers find  a culinary experience and craft beers that are often unavailable in Hawaii during most of the year. Past dishes have included fresh Ahi poke tostadas, deep fried avocado slices with savory island sauces, seafood delights prepared in every way imaginable, Big Island grass-fed steak coated with Kona Coffee marinade, fresh Waimea grown salads sprinkled with mac nuts and micro-greens, hand churned pineapple gelato, and artisan won-tons. Everything is an expression of the beautiful food and culture of the Hawaiian Islands. With a ticket, the food sampling is unlimited until it’s gone, so attendees roam around sampling and tasting to their hearts delight, while enjoying world-class entertainment. An upgraded ticket allows access into the Connoisseurs Lounge inside Honu’s restaurant, serving additional and premium tastes and activities for the most serious craft beer aficionados 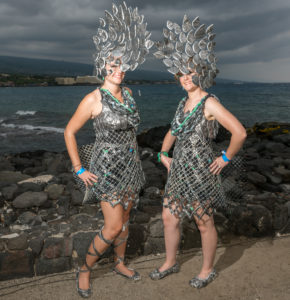 Entertainment includes some of Hawaii’s best musical talent, as well as the ever popular “Trash Fashion Show,” a performance of fashion art and sustainability that delights the crowd with a high energy spectacle of original designs created by a team of local “trashionistas.” Rocking a playlist to excite the crowd at just the right moments, the show reminds us how we can each manage waste more responsibly in our everyday lives.

The pre-party starts off healthy and strong at 7:30 am, with the annual “Run for the Hops” 5K / 10K run/ walk.  Presented by Peoples Advocacy for Trails Hawaii (PATH), the family friendly run begins and ends at BMW of Hawaii. Entry fee is $30 and includes a commemorative T-shirt, refreshments, award ceremony and beer tasting following the race. Registration is open at www.KonaBrewersFestival.com.

The Kona Brewers Festival Homebrew Competition is a local competition sanctioned by the American Homebrewers Association, recognizing the most outstanding beer, mead and cider produced by amateur brewers.  Judges come from all over the United States to award winners for 28 different styles. Winners are announced in celebration at the Kona Brewers Festival. The Best of Show Winner for beer will have the name of their brew engraved on a plaque mounted to the Kona Barrel trophy at Kona Brewing Company’s Pub in Kailua-Kona. Entries must be registered by the cutoff date at www.KonaBrewersFestival.com

Tickets will be released on January 12, 2019 at 11am (HST) online only at www.konabrewersfestival.com

General Admission, 3:00pm to 7:00pm, $85 to support island beneficiary organizations focused on environment, education, culture and youth and include.

Connoisseurs Lounge, 2:00 pm to 4:00pm, $185 to support island beneficiary organizations. These upgraded tickets include all General Admission amenities plus admission to the festival and the connoisseur’s Lounge. Connoisseur’s tickets offer special beer and food pairings, entertainment, air conditioned seating, educational talks by local brewers, and access to move between the Lounge and general areas, making this  the best ticket for extreme beer lovers, while further supporting the fundraising efforts of the festival.

Community collaboration-cultivating aloha among diverse groups through celebration that 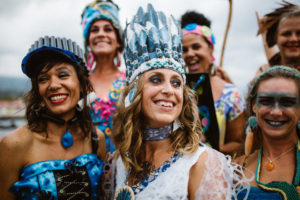 Sustainable Legacy-perpetuating a model of interconnectedness between humans, culture and environment

Responsible Guidance – acting with integrity and generosity for future generations