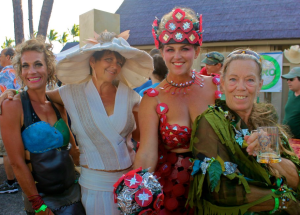 The Kona Brewer’s Festival prides itself on being a leader in the sustainability movement for the Big Island of Hawaii; celebrating 20 years of taking care of the aina and having great fun too!

The Trash Fashion Show has been an integral part of the Kona Brewer’s Festival line-up since 1995. The show  has become a Festival highlight, enjoyed by over 3000 people every year. Guests admire the fashions and stage routines meticulously and thoughtfully crafted by the 25 “designer” models. The show is a forty-minute high-energy stage presentation that is appreciated not only for its sheer joy but also for its significant contribution to recycling awareness.

“The Trash Fashion Show consists of a very creative group of people. Some of our “trashy” folks have been collecting rubbish for years. The process of collecting “misunderstood stuff” and creating wearable art allows everyone to analyze our consumption and the implications of excessive packaging, discarded household items, ocean debris, and all the superfluous stuff that ends up in our landfills,” said Thalia Davis, who surpervises the Trash Fashion Show each year. “The mindlessness of consumption is an opportunity to educate with the functional beauty of art, the inspiring energy of music and the excitement of the stage. The Trash Fashion Show designers and models love having the opportunity to work and create together and share our passion with the community”.

Can you believe that 25 volunteers can help 3,000 craft brew enthusiasts pre-cycle, recycle, and compost 90% of their waste?  At Kona Brewers Festival, Zero Waste is becoming reality.  Industry standards dictate that 80% of discards be diverted from landfill in order to be called “Zero Waste.”  Since 2008, festival organizers have exceeded this goal.

When the Kona Brewers Festival tapped its first kegs 20 years ago, recycling services in Hawaii were just a dream, but a distinct goal to protect Kona’s unique environment was born. The original Trash Fashion Show strutted trashion made from reused trash and the event’s first beneficiary was Recycle Hawaii. Even in that inaugural year of celebrating craft beer on the Big Island, environmental education was the focus.

In 2014, 76 bags of waste were composted and 3 truckloads were recycled, leaving only eleven bags left to go to the landfill. In fact, almost 30,000 items from the Festival’s waste stream were diverted by the innovative use of ti leaves and sporks. All the compost was delivered to a local public charter school just a mile from the festival for use in student soil science studies and eventual integration into their school garden program.

Since the festival made the transition to zero waste in 2008, approximately 270 community volunteer beneficiaries have helped compost, feed pigs food scrap, recycle, and haul festival discards. These volunteers may have started the festival not knowing about Island composting and recycling opportunities but they leave feeling enthusiastic about making a difference all of us can incorporate into our daily lives.

Krista Donaldson, the team leader of the Zero Waste portion of the Brew Fest said, “Incorporating sporks and ti leaves provided another easy and replicable model for our community to eliminate waste. 4,000 plates and 13,000 napkins from the Festival’s waste stream were diverted. Reusing is an important strategy in leaving less of a footprint on our beautiful island. Food scraps and food service ware waste will be delivered to a local composting specialist who will use festival discards to start a much needed community composting system.  We are excited that festival waste will help fuel the composting revolution on Hawaii Island.”

At the Kona Brew Fest there are brightly colored compost and waste bins positioned throughout the Festival, with volunteers helping to show which waste goes where. These are called the Zero Waste tables and are instrumental to the festival’s on-the-ground success with sustainability.