Only 9 days left to post a photo of yourself by Jan. 25 and win a trip to Kona Brewers Festival

Kailua-Kona, Big Island of Hawaii, January 15, 2014 — All beer lovers have a photo of themselves drinking a big frosty pint at their favorite brewery. Now, that photo could earn a free round trip ticket to Kona Brewers Festival on Hawaii’s Big Island Saturday, March 8, 2014 from 2:30 to 6:30 pm. Entries are being collected and posted at the Kona Brewfest Facebook page now through January 25, 2014. 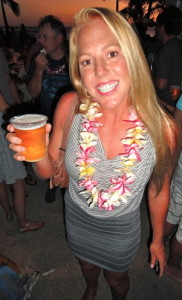 The 19th annual Kona Brewers Festival will indulge craft beer aficionados and foodies alike and will be held rain or shine on the beach and luau grounds at King Kamehameha’s Courtyard Kona Beach Hotel in Kailua-Kona. A total of 40 of the country’s best breweries and 40 Hawaii restaurants will serve 2,000 people at the yearly festival and fundraiser.
The Alaska Airlines Kona Brewfest Contest is open to beer lovers aged 21 and up who can fly to and from one of the nearly 100 cities Alaska Airlines serves. Each photo posted results in one entry.

Two (2) Grand Prize winners will each receive 2 RT tickets from an Alaska Airlines destination city, four (4) nights lodging at the Sheraton, (2) Paina tickets and (2) BrewFest tickets. Full details, entries and sweepstakes rules are available on the contest page and on the Kona Brewers Festival Facebook page.

Kona Brewers Festival is presented by Alaska Airlines, First Hawaiian Bank and Keauhou Veterinary Hospital, and began in 1998 as an anniversary celebration for Kona Brewing Company.

About Kona Brewers Festival
The Kona Brewers Festival is a community fundraising event made possible by the Bill Healy Foundation that promotes the craft brewery revolution in Hawaii and encourages professional collaboration between brewers and chefs. The event raises funds for environmental, educational and cultural organizations and has raised more than $650,000 in the past 18years. For information on any of the festival events, visit www.KonaBrewersFestival.com or call 808-331-3033.