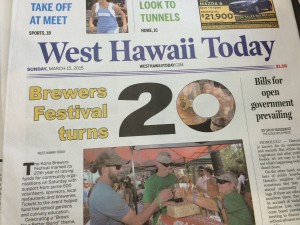 The 2015 Kona Brewers Festival, held on March 12-14, was an amazing success for our 20th anniversary. Not only did we raise a record amount of funds for our beneficiaries, we garnered some great press from craft brew bloggers, local journalists and trade magazines. Below are links to the articles and posts:

Beer in Hawaii – “Brewery List for the 2015 Kona BrewFest”

Beer In Hawaii – “Another Kona Brew Festival in the Books”